A season-ending injury isn’t what she wanted, but it’s what she got. And in retrospect, it may well be the thing that brings Olympic Gold Medalist Gwen Jorgensen to the thing she wants most: Olympic glory, for the second time—in a new sport.

Gwen Jorgensen was ultimately not to be spared the ignominy of pain. She was indeed familiar with the exquisite, rewarding pain—the good pain—that hard training brought. But this? This was different. Injury is the bane of an athlete’s existence, and for all her success, this sharp, nagging pain was about to upend a four-year plan. 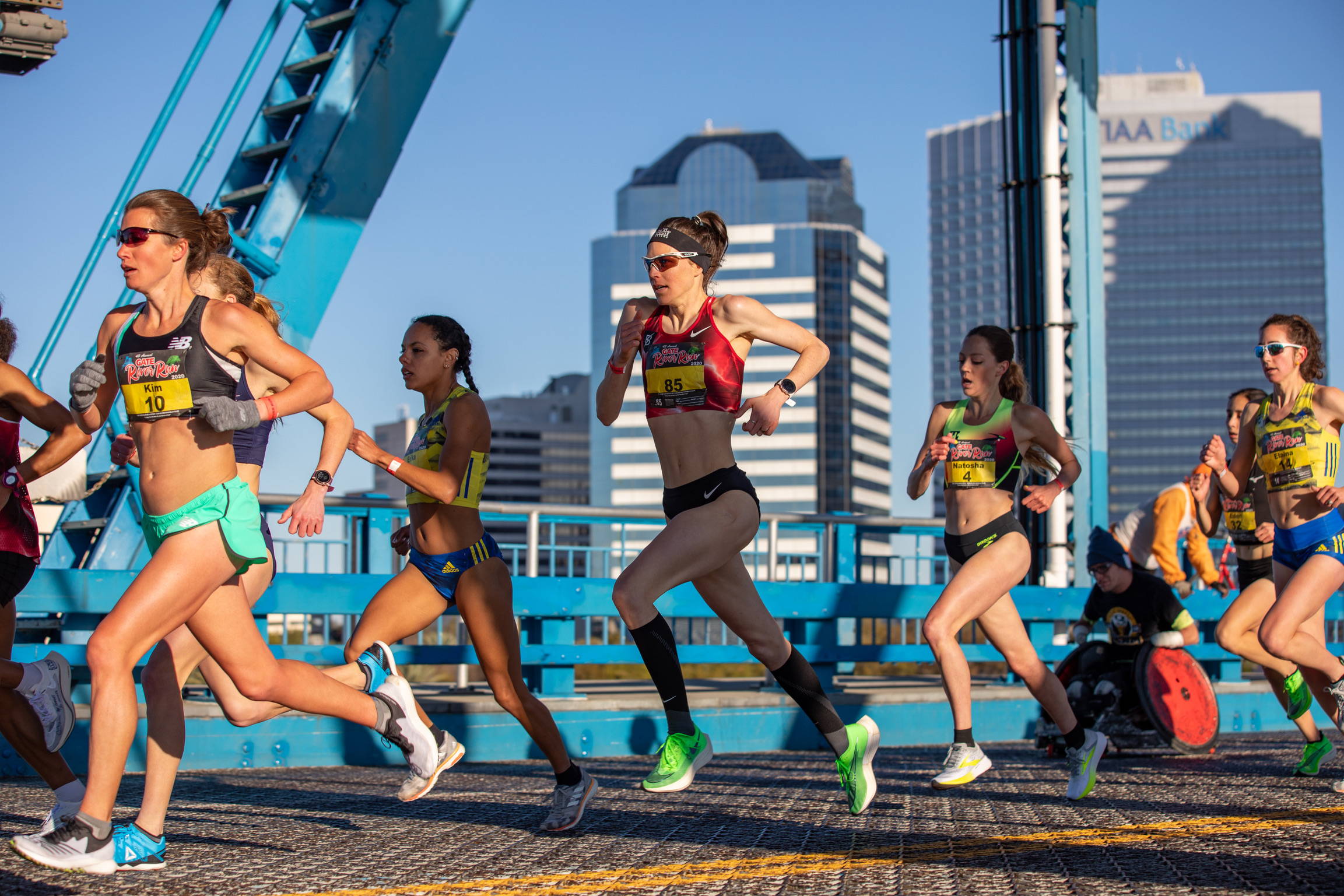 Enter Coronavirus, the pandemic that turned the world upside down and put a halt to everything, not the least of which were races. While it put the pro runner’s season on pause, the self-quarantine was what Gwen Jorgensen needed—body and soul.

“I’m itching to race, but we don’t know if and when that’s going to happen. You just can’t control the uncontrollable,” Jorgensen says. “So I just need to take advantage of what I can control, and that’s being healthy and getting in the workouts.”

A Wisconsinite by birth, Jorgensen’s name is revered among the multi-sport space. After swimming and running at the University of Wisconsin-Madison, she spent a few years in the corporate world as a tax accountant. That was before USA Triathlon scouted her and groomed her to represent the United States in its quest for national glory on the International Triathlon Union circuit, and ultimately, on the Olympic dais. 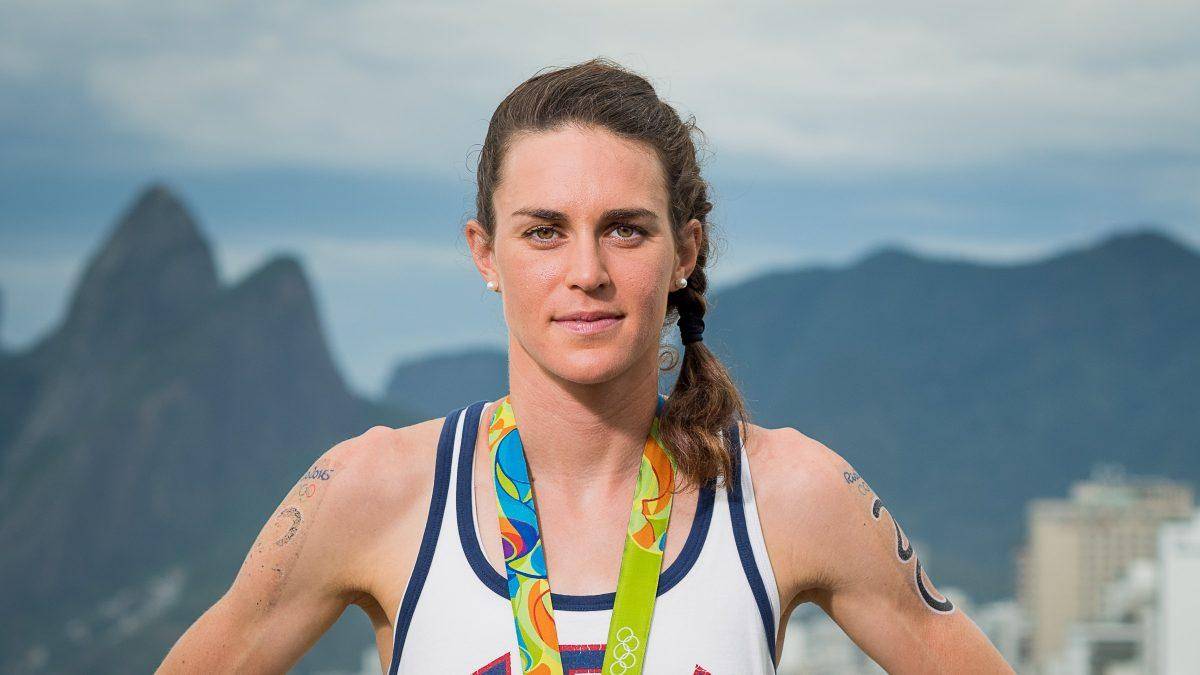 Not only did she establish herself as a dominant force in triathlon, she netted two Olympic appearances (2012 in London and 2016 in Rio). It was her focused decision in 2012 to create a four-year mission—all in for a gold medal in Rio— that was rewarded with the top prize that year. After battling with Swiss powerhouse Nicola Spirig all race, Jorgensen launched an explosive run kick, instantly breaking away from the Swiss triathlete. With 40 seconds in her pocket, she reached out, grabbed the finish banner, and raised it over head with a smile. Rio gold was hers.

She won ITU Olympic-distance events at will. She had transformed from a run specialist to an all-around threat, earning two ITU World Champion titles as a result. She now had the biggest prize in the sport, an Olympic gold medal. Her dominance in the sport was so thorough, she decided it was time to have a child (she and husband Pat Lemieux welcomed son Stanley Jorgensen in late 2017), and retire from triathlon. She instead pivoted to a new challenge: running.

“With triathlon, I felt I’d reached my potential,” Jorgensen says, adding with a laugh when pressed, “No, nope… not coming back to triathlon. No desire to come back! I’m honestly happy I made the switch.” 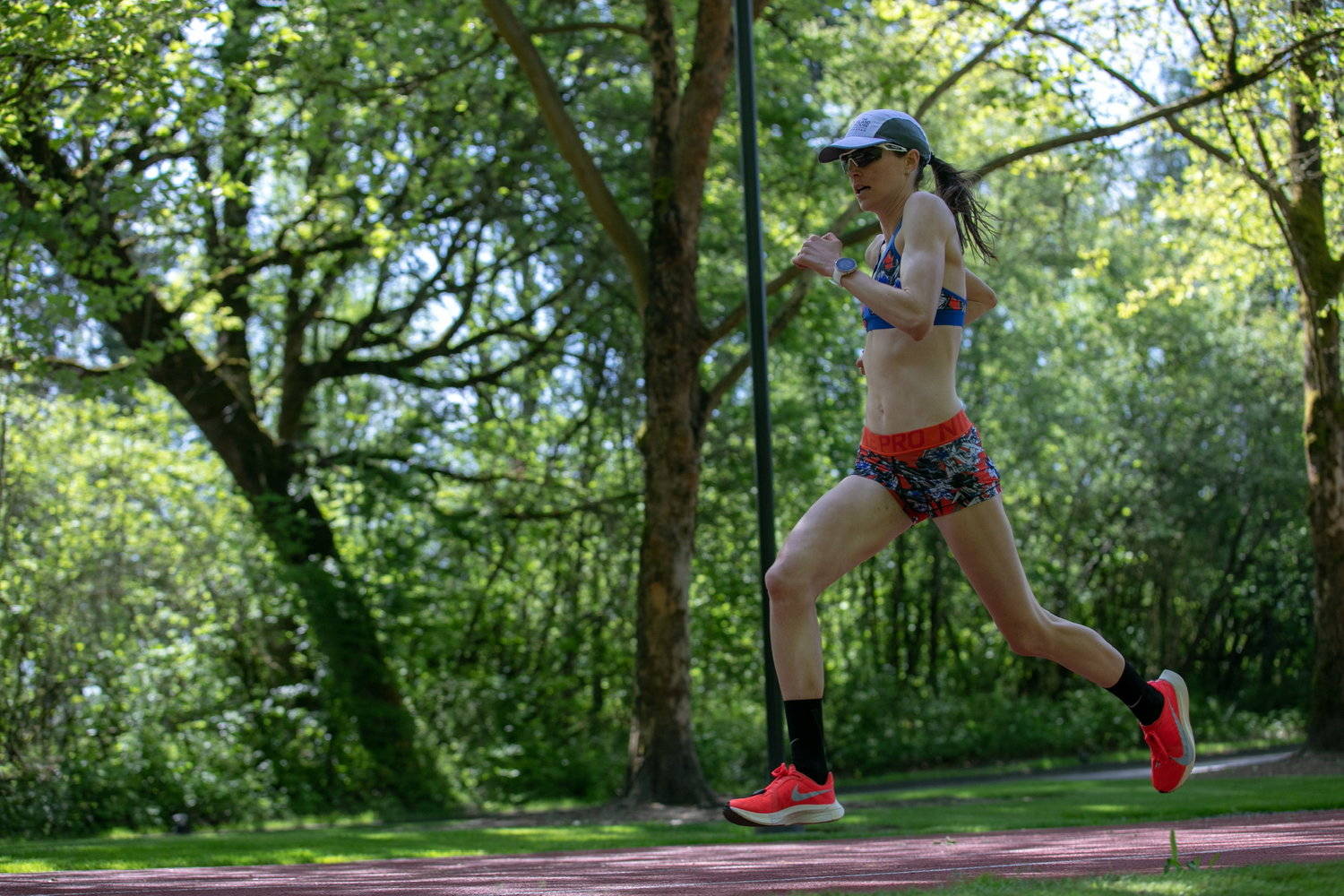 Now as a professional runner and with triathlon in the rear view mirror, Jorgensen can focus on outright run speed missions across all distances. She also set a running goal akin to her 2012 pledge: win an Olympic gold medal in the marathon at the 2020 Olympic Games, as well as a World Marathon Major, which includes Boston, Chicago, New York, Tokyo, London and Berlin.

But for the woman who has literally achieved all she has set out to in her career, last year presented a daunting roadblock. For the first time in her pro career, Jorgensen was facing a huge derailment to her four-year Olympic Gold, Volume 2 program; the first chronic injury. Haglund’s deformity, a bony enlargement at the back of her heel, resulted in painful bursitis. “It actually started when I was pregnant, and it didn’t get bad until I did the Chicago Marathon.”

Rest and platelet-rich plasma treatment wasn’t resolving the pain, leaving just one option: surgery. In retrospect, it was the right call. “Coming back from it was slow, but It was so worth it to be able to run without pain,” she said. 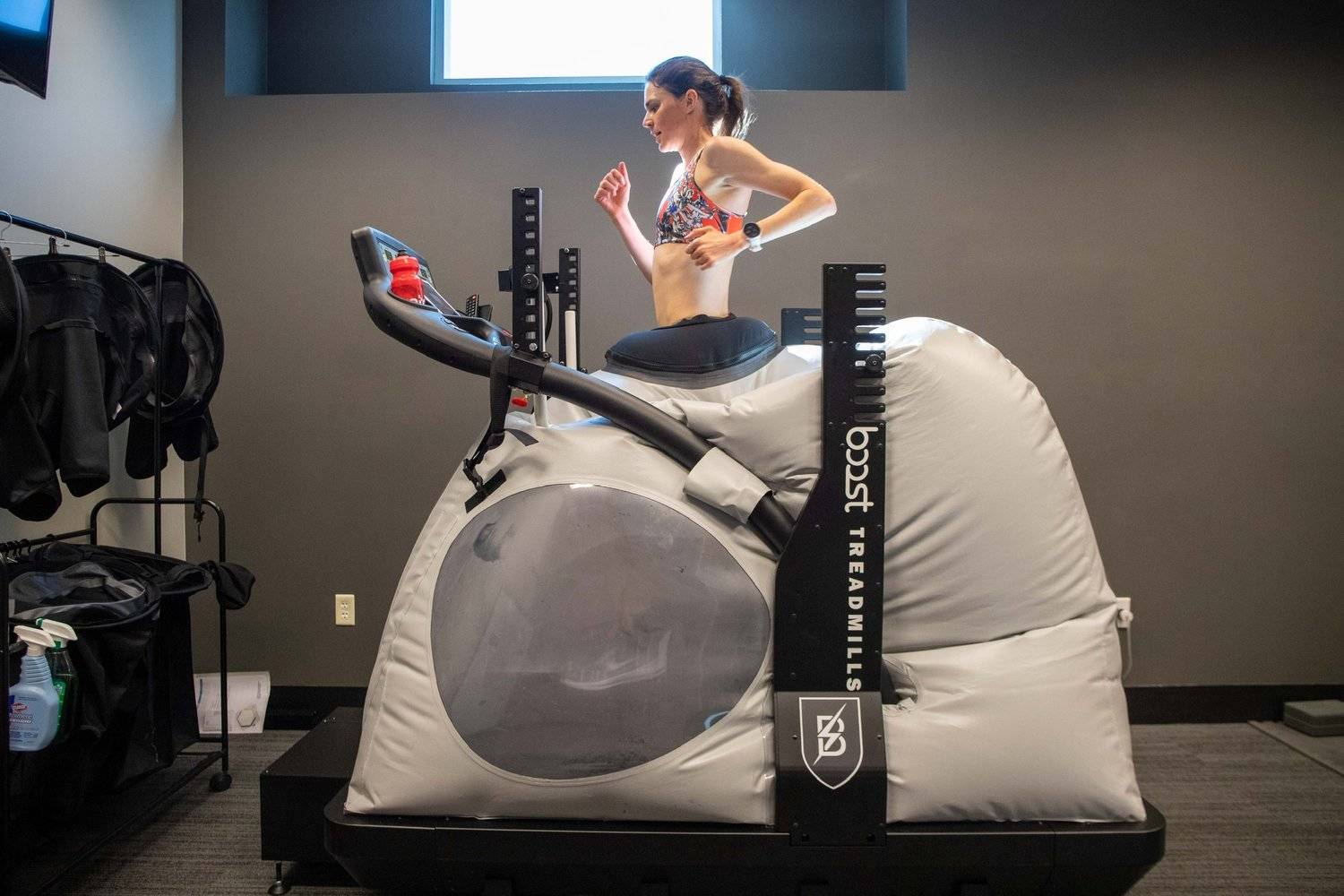 Still, the surgery put her on the proverbial back foot. She was unable to make even a qualifying event start, let alone perform at her peak. Her season was done, and so too it seemed was her quest to win an Olympic medal in another sport…at least for 2020.

Then, COVID-19 spread around the globe. Sports became an afterthought, taking a backseat to community health threats. First went spring running events. Then Olympic qualifiers. Then, ultimately, officials had to make the call: suspend the Olympics until 2021, the first such suspension due to a global pandemic.

And if there was a gold lining in it all, it provided Jorgensen a fresh lease; her Olympic running dream could continue. 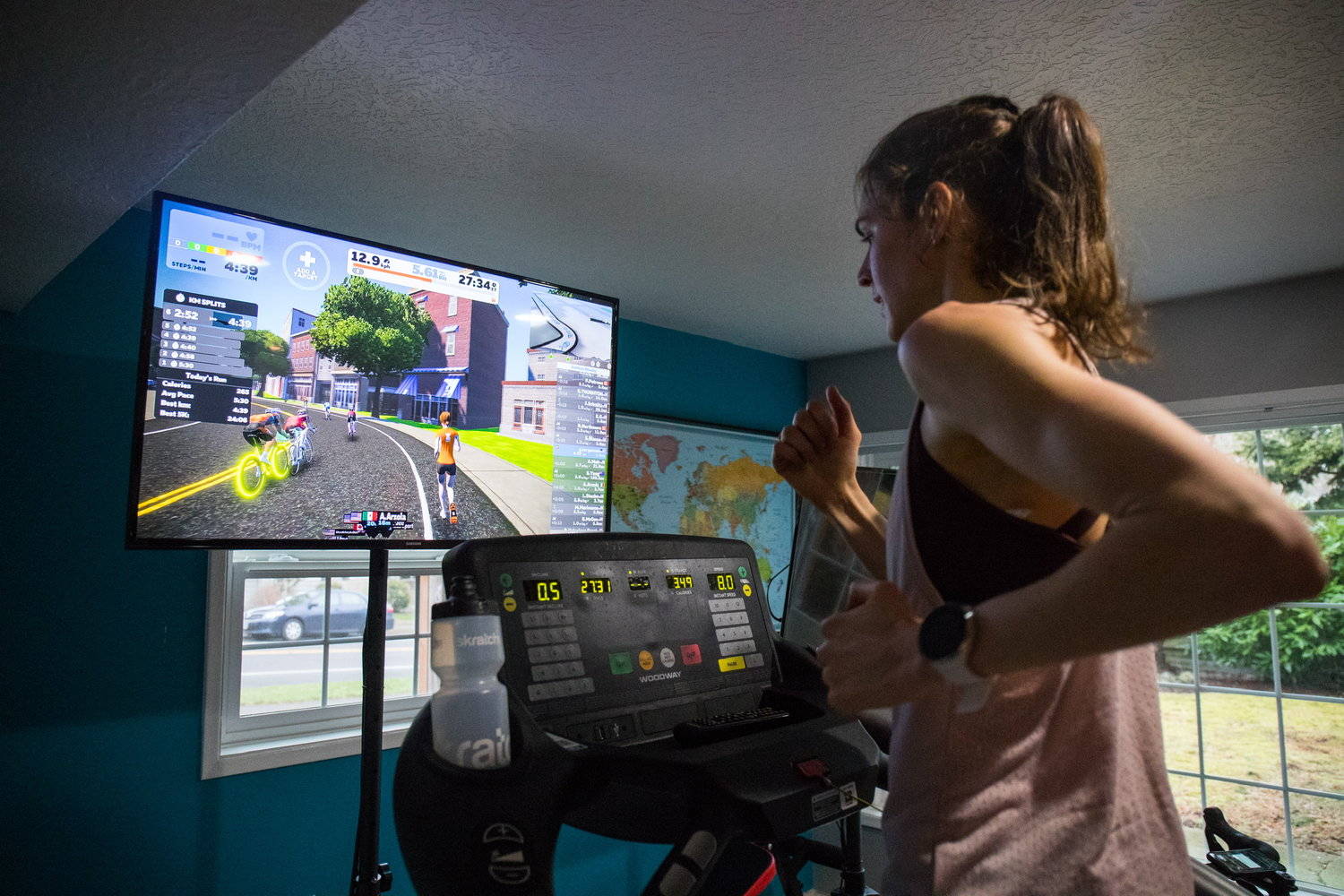 Like the rest of us, Jorgensen’s quarantine at home in Portland, Oregon was a case of making do. She didn’t have weights at home, but had a treadmill and bike trainer so she could still train, plugging into Zwift to keep it interesting.

But she did have one extra edge: an opportunity to turn off the full-time athlete mode and just be mom.

“It’s funny; with COVID-19 going on, I’ve had so much more family time,” she says. “I obviously haven’t been to the gym—and I don’t miss the pool at all, she says with a laugh— but I’ve had all this great time at home with my husband and son. Really, the hardest part, as a mom, is not being able to take my son to a park. That’ll come with time. But we’ve made the best of the situation, and having this family time with Stanley as he’s growing up, I wouldn’t want it any other way.” 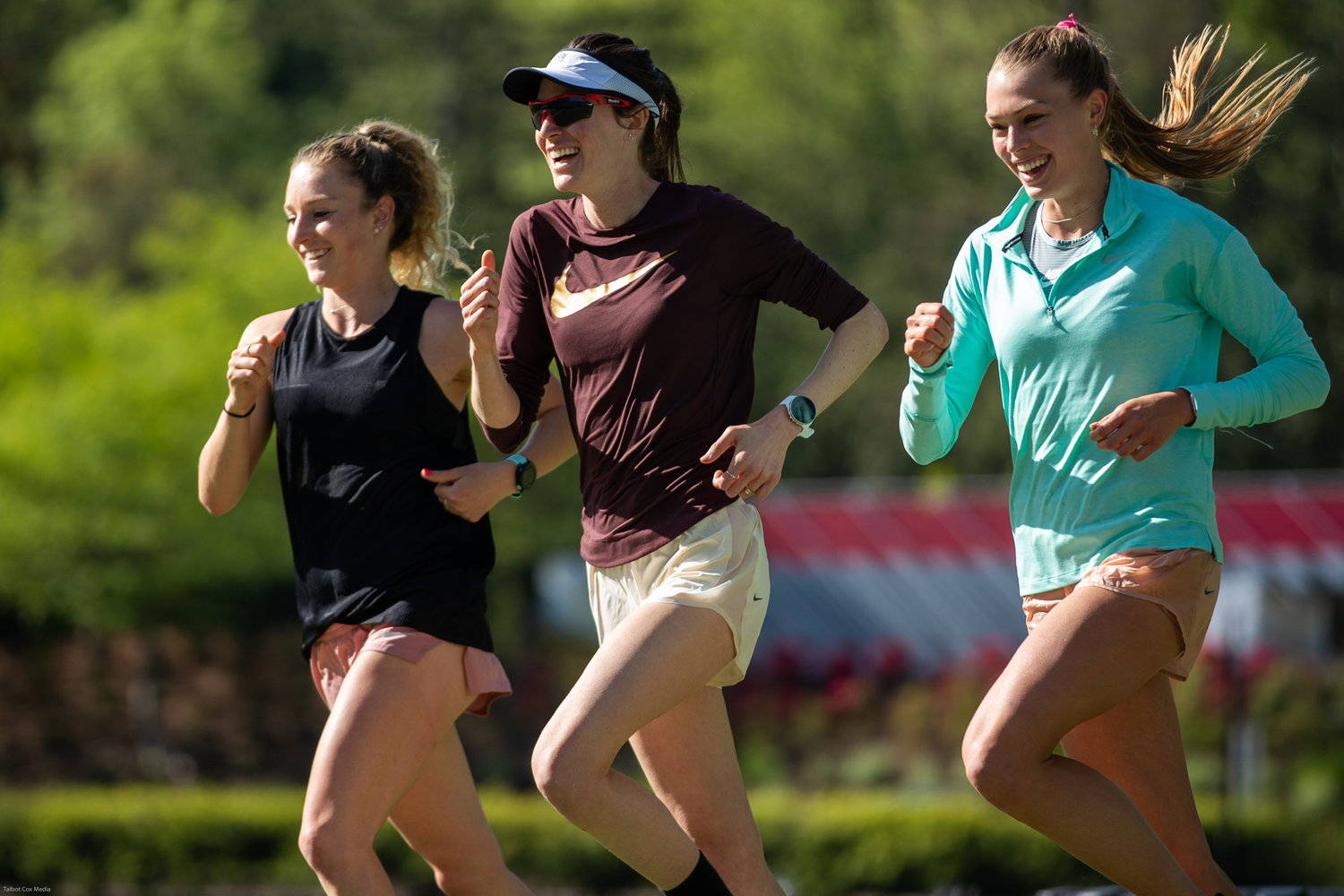 With the Olympics now slated for 2021, she has also reset her goals. She’s pivoted from marathon to shorter distance events. Fully healed from her heel injury, she’s joined a small bubble of 14 other self-quarantining Bowerman Track Club teammates for a short altitude camp in Park City, Utah as they get back to small group running. Her Olympic dream was deferred, but it’s still very much alive. “I was still training hard at home in Portland, but It was hard to remain focused,” she says. “I had to teach myself to push harder without others around, which has been different. Now, we can run together as a team and to be honest, I’m just happy now to be able to run healthy.”

Her Olympic dream was deferred, but it’s still very much alive. While she is afforded another chance at chasing Olympic glory next summer in Tokyo, starting with Olympic Trials for the 10,000 meter and 5,000 meter events in mid-June, Jorgensen has a greater sense of her place in the grand scheme….and it’s perhaps because of her setback last year that she recognizes it.

“Things haven’t gone as smoothly as I wanted with being injured, and it hasn’t been that great performance-wise to this point,” Jorgensen admits. “But now, I’m in a great place. I love the training, I see the improvement, I know that what I’m doing is making me a better athlete and of course I really want to race. But there are way more important things going on in the world right now.” 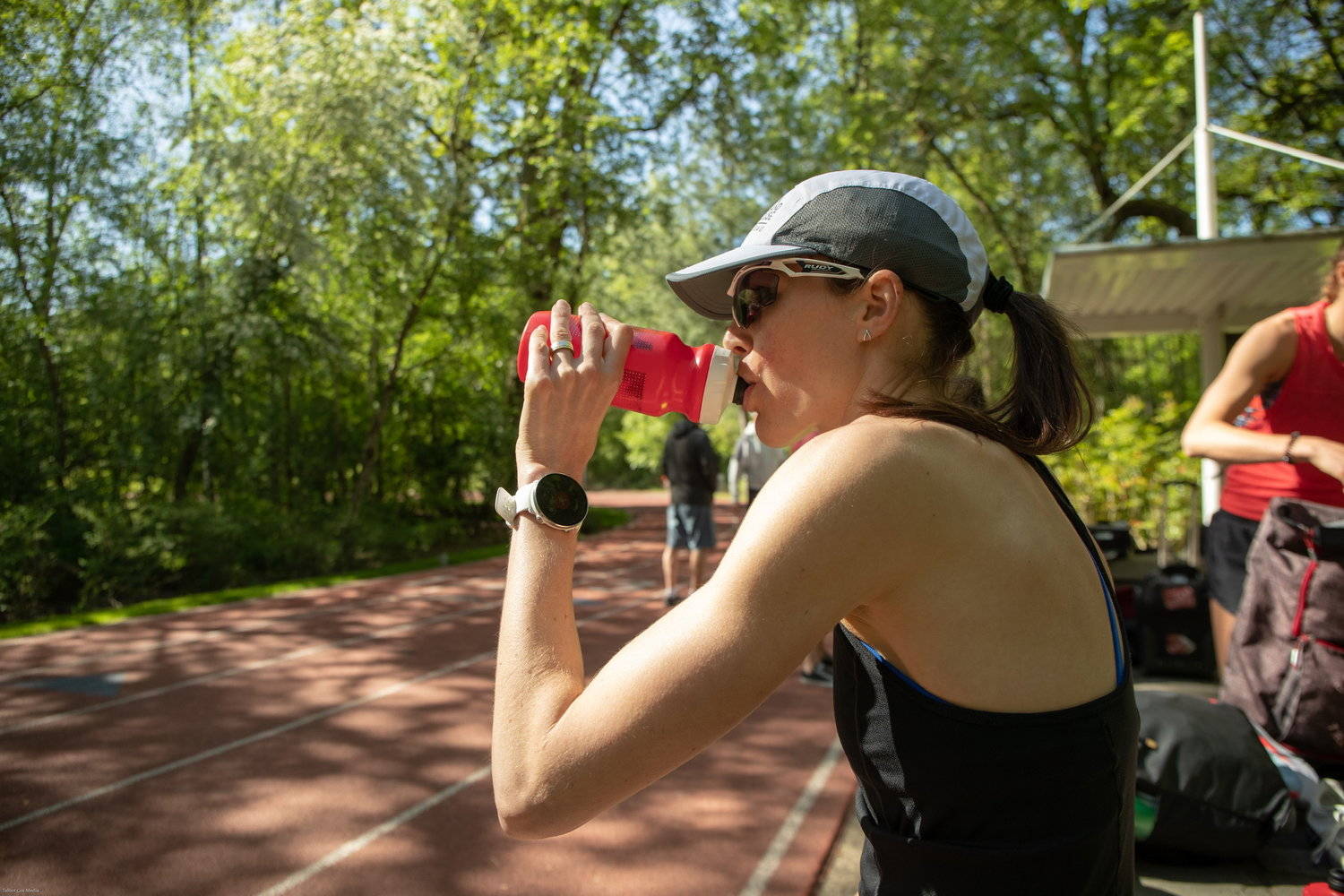 Provided the Olympics do go forward next summer and Jorgensen makes the team, don’t bet against her. With a gazelle-like physique, long legs grabbing meters in huge strides, married with Tokyo summer temperatures typically running from 80 to 90 degrees F, her morphology should be well suited. “If it’s hot, being leaner and taller means my body should be able to dissipate the heat quickly,” she says. “I’ll be prepared for any situation— but I need to get through trials first.”

And if the stars align and she qualifies for the Tokyo Games? Having been in the Olympics twice already, she certainly has an advantage in navigating the chaos. “It would be a dream come true,” she says with a lilt in her voice. “My first Olympics in London, I learned so much. I needed that first one to succeed in the second. It’s not just any other race.”

Super easy to swap/change lenses. Like the other lenses, these have great coverage and virtually no glare. Also love the look of the multi laser orange paired with the blue frames.

I was struck by a horse trailer on a country road, and was injured pretty badly- busted up all over, and a broken arm. Would have been WAY worse if not for this helmet. The first thing I bought after the crash was another one- it’s a great fit, great size, great price, and proven to save lives. Highly recommend.